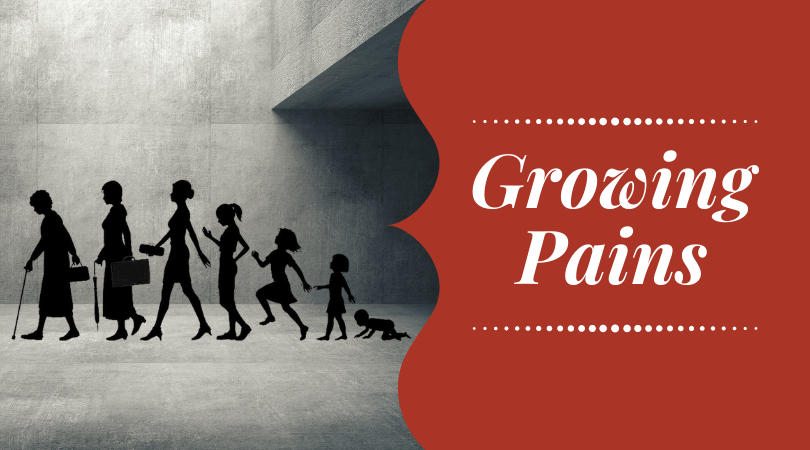 As a child, I would often complain about pains in my knees. I distinctly remember attending the doctors and hearing that what I was experiencing was commonly known as “growing pains”.  “It’s not that growing is painful” the doctor said, but the general consensus at the time, seemed to be that whilst there is no known cause, growing pains are more about over exertion of the muscles.

Well, if I could have spoken to my 11-year-old self, I would have said “It’s not true! Don’t believe the hype, growing is most definitely painful!”  Of course, my doctor was referencing my condition and not life but maybe if I’d known then, what I know now, I would have done things differently. Or would I?

I have felt every trip, fall, bruise, scrape, knock and blow on this road we call life. Would I call myself a veteran? …perhaps, in some ways but in others I’m most definitely still a rookie! There are some things you just don’t do twice, like walking into a revolving door but other things, I’ve experienced way too many times than common sense would dictate. For example, If I were to tally up all the parking tickets and speeding fines I’ve paid over the years, I could easily buy my niece the first car she is hankering after, but despite the pain of having to part with my hard-earned salary, I managed to do the same thing, over and over ….and …okay, let’s park this here!

The truth is, despite the wisdom and advice of those who have trod this path before us, for many of us, we only grow when we experience the pain of wrong choices. Psychologists in the United States have looked at the thought processes behind making poor decisions and in doing so, examined the court testimony of a police officer who, despite graduating top five in his class, mistook his gun for a Taser and killed an innocent man. The same psychologists also dug through the destroyed career of a once-rising politician who despite knowing the risks, used his work phone to send sexually explicit messages. They also found dozens of studies confirming that doctors, fail to wash their hands one out of every three times they enter a hospital room, a mistake that kills thousands of patients each year.  The psychologists concluded that:

“Under the right circumstances, a subconscious neurobiological sequence in our brains causes us to perceive the world around us in ways that contradict objective reality, distorting what we see and hear. This powerful shift in perception is unrelated to our intelligence, morals, or past behaviours. In fact, we don’t even know it’s happening, nor can we control it.”

I find this statement interesting for a number of reasons but not least because it presupposes that an aberration from the norm is neurobiological. Whilst I don’t doubt that there is scientific reasoning to support this argument, I can’t help but think of the Israelites. Despite God plucking them out of a life of slavery, performing undeniable miracles, providing for them bountifully in the desert during their 40-year sojourn, they made one poor decision after another (I encourage you to read Pastor Royston’s great Exodus series).

The less scientific response to this is simply sin.

“I have seen these people, ‘the Lord said to Moses, ‘and they are a stiff-necked people…”

It’s no accident that the Israelites wondered the wilderness for 40-years. God knew the exact path to the promised land but a series of poor choices kept them from reaching their final destination in good time. The Israelites experienced a whole host of growing pains, many of them needless but sin caused them to keep turning away from God. Unlike the neurobiological sequence, sin is a part of the DNA of every human! Our spiritual DNA and just like our biological DNA not something we can alter. The neurological sequence suggests that modifying your behaviour can head-off an episode of aberration.

But the Bible explains the condition of sin very clearly:

Behold, I was shapen in iniquity; and in sin did my mother conceive me.”

Clearly then, we are born with our sinful natures.

The Bible also tells us:

“For there is not a just man upon earth, that doeth good, and sinneth not.”

“As it is written, there is none righteous, no, not one . . . For all have sinned, and come short of the glory of God…”

Note that it says all not some, or many but all.

Until we come to the realisation that we cannot control our sinful nature without divine intervention, we will always be subject to the controlling power of sin. The good…no, wonderful news is that: “All are justified freely by his grace through the redemption that came by Christ Jesus. (Romans 3:23)”

God knew that mankind would need deliverance from sin and so it was all part of His plan of salvation.  “For God so loved the world, that he gave his only begotten Son, that whosoever believeth in him should not perish, but have everlasting life. (John 3:16)”

Science will try and reason away cognitive dissonance and the denial of truth but our life journey will only lead us to God’s intended destination when just like the Israelites, we willingly and fully submit to God’s will. As you go through this week, question the impact that sin has made in your life and actively ask God to help you submit to His will, so that you can find the joy that comes in living according to His will, travelling the path that He has set and making decisions based on His guidance.

We read in Proverbs 8:35: “For those who find me find life and receive favour from the Lord.”

Father God, please show me clearly how sin alters the path you intend me to walk. Bring me under complete submission of your will, so that I can complete this life journey and spend eternity with you. I ask in the precious name of Jesus. Amen