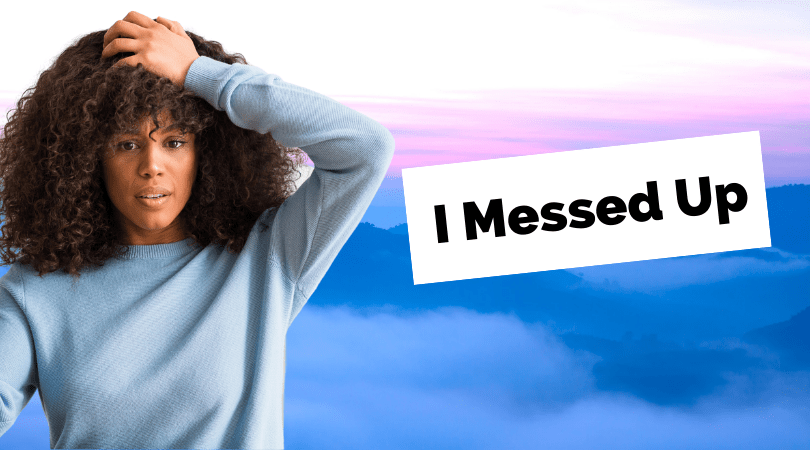 If you’re anything like me, you’re probably more proficient at making mistakes than you would care to admit.  None of us like to think that we messed up but the truth of the matter is we are all guilty of messing up, sometimes badly.  It can be very distressing saying the wrong thing, acting in a way that’s unbecoming or just doing something that in hindsight you would have handled differently.

The Bible is full of characters that messed up, so in case you think you have the monopoly on this, you don’t! God is very clear in showing the state of the human condition. We recently looked at the temptation to misrepresent ourselves when we are not being authentic and how wearing a mask is damaging. God reveals to us through these characters that no matter where we are, He can use us.

In fact, God made a point of using messed up people to show case not only His compassion and love but His intention to reach and use ordinary people, like you and me and those we might consider to be socially unappealing. Let’s take a brief moment to consider just two of the many examples found in the Bible.

Before Paul became the writer of most of the New Testament books, he was known as Saul of Tarsus. He literally terrorised the early church, giving his seal of approval to the murder and imprisonment of Christians. Saul made it his day job to destroy the church, going door-to-door in Jerusalem looking for people who followed Jesus so that he could incarcerate them. After putting these people in prison, he then planned to hunt down the Christians they sent correspondence to (Acts 22:4–5). On his way, he had an encounter with the resurrected Christ, and his life did a complete 360. He became one of Christ’s most devoted and ardent followers.

It goes without saying that Paul was deeply regretful of his past life and past mistakes. He knew he had truly messed up. In his letter to Timothy he said, “Here is a trustworthy saying that deserves full acceptance: Christ Jesus came into the world to save sinners—of whom I am the worst. But for that very reason I was shown mercy so that in me, the worst of sinners, Christ Jesus might display his immense patience as an example for those who would believe in him and receive eternal life.” (1 Timothy 1:15–16)

Then there’s the biblical character of Tamar. Her life story would not be out of place on the likes of the Jeremy Kyle show.  Tamar left her family at a young age to marry into the family of Judah. To set the scene, a woman’s worth was decided by her ability to have children. Unable to conceive with her first husband, Er, God struck him down and she married a second brother, Onan. Onan’s fate was set when he refused to conceive with Tamar, so God punished him and he also died. By law, Tamar then married a third brother, and was still unable to conceive. Faced with the fear of being childless and destitute, she set out for justice. Dressed as a prostitute, she coerced her father-in-law, Judah, to have sex with her and she bore twin sons. While her actions were unethical and she almost lost her life for it, one of the sons was the ancestor of King David—a direct lineage to Christ.

The point here, is that even when we experience the pain of our poor choices or actions, it’s easy in these moments to feel there is no way back, that God can’t see past our sin and there’s no hope for restoration. I think we all face these feelings when we fail. The good news is that our saviour is all about redemption and Psalm 103: 8-10 puts it beautifully:

“The Lord is merciful and gracious, slow to anger, and plenteous in mercy. He will not always chide: neither will he keep his anger for ever. He hath not dealt with us after our sins; nor rewarded us according to our iniquities.”

I read somewhere that “God’s mercy is bigger than any mistake you’ve made” and this is exactly what the psalmist (King David) is conveying. If you have descended into a mental pit of despair thinking you are beyond saving, then I’m here to tell you, that you are trapped only within the confines of your own mind.

There is nothing you have done that is beyond forgiveness. “If we confess our sins, He is faithful and just to forgive us our sins.” In the week ahead, as you go to bed each night and wake up each morning, remember these simple words: “My grace is sufficient for you…” (Corinthians 12:9)

Dear Father, I messed up. In fact, my whole life is a mess and I need you to fix me. Please forgive me for my sins and show me how to follow you and live in your will. You are all I need to make things right. Amen

This Week’s Song of Encouragement