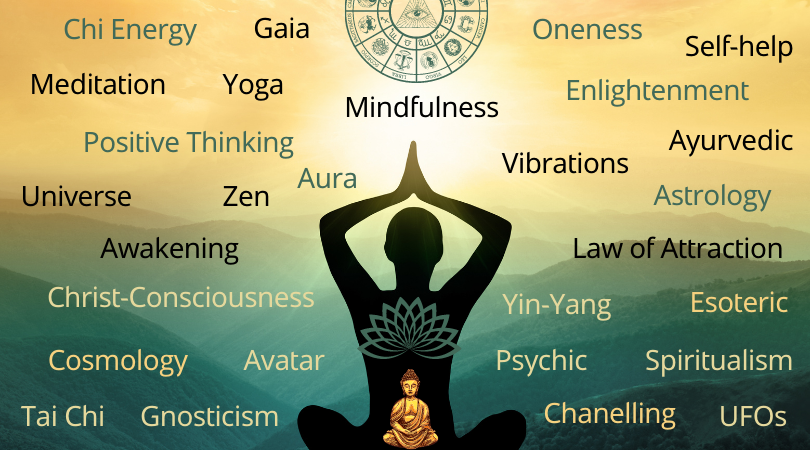 The New Age Movement is a collection of spiritual beliefs or philosophies, that first gained a lot of traction in the 1970s. Trying to find a consistent definition is actually very challenging due to the fact that there is no New Age Church, no defining New Age religion, no founding person, no membership, and no standard set of doctrines.

Although often in conflict, they do all share the overarching belief that the God of the Bible does not exist as the Bible depicts.

The premise of New Age philosophy is in direct opposition to the first commandment which says, “Thou shalt have no other God’s before me” meaning that God and not self is the focus of worship.

You will often find that those engaged in New Age philosophy describe themselves as being ‘spiritual’ and not ‘religious’ meaning that they do not recognise any organised religion. They also have a number of other beliefs:

Whilst there are any number of branches on the New Age tree that we could explore. Let’s choose one that although on face value and a seemingly harmless, has drawn in both non-Christians and Christians alike. Namely, Yoga.

Yoga has infiltrated many church groups as a mode of outreach to bring people into the church, but even a brief look at its roots, reveals its non-Biblical origins. What many people do not realise is that Yoga is a philosophy with roots deeply entwined in Hinduism. The “Lord of Yoga” is “Shiva, The Destroyer” also known as “The god of Death.”

To quote one article, “Yoga is rooted in spiritualism, and many of the postures have a meaning that goes beyond simple strengthening and lengthening of muscles. This ancient form of exercise goes deeper into the connection between mind, body, and spirit by using specific postures and poses.”

In part II we will explore Yoga in more detail but until then, think about the fact that many people believe they are on a path to “enlightenment” and believe that this can be found by opening themselves up to the myriad of philosophies available. Ironically, this same path has caused many to experience the terrifying reality of the demonic forces that sit behind these teachings.

YouTube is just one platform that is awash with the testimonies of those who have turned from New Age to Jesus, once they realised the knowledge they craved was leading them down a very dark and very deep rabbit hole.

In Ephesians 1:18 we read that enlightenment comes when we know the ‘hope’ that we have been called to: “I pray that the eyes of your heart may be enlightened in order that you may know the hope to which He has called you, the riches of His glorious inheritance in His holy people.”

My son, pay attention to what I say; turn your ear to my words. Do not let them out of your sight, keep them within your heart; for they are life to those who find them and health to one’s whole body. Above all else, guard your heart, for everything you do flows from it. Keep your mouth free of perversity; keep corrupt talk far from your lips. Let your eyes look straight ahead; fix your gaze directly before you. Give careful thought to the paths for your feet and be steadfast in all your ways. Do not turn to the right or the left; keep your foot from evil.

New Ageism is actually not new at all, teachings that lead us away from the truth and into spiritual confusion and separation from God are as old, as the world’s creation. I pray that by God’s Grace, as we all move into another week, we ask for true enlightenment that brings eternal life with our Lord and Saviour, Christ Jesus.

Father help us to understand the many devices employed by the enemy to try and separate us from you. Give us wisdom, understanding and above all, a heart willing to accept the truth. Amen